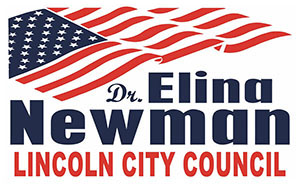 Elina has lived a colorful life, to say the least. She tells you what drives her, what defines her, and then expands on her family struggles to get to the United States.

I believe in truth and transparency. These two traits have guided everything I do in life. I had never been interested in politics until July 2020, when the nationwide riots started. At that point, more than ever, things looked like what my family fled years ago. I am not in this for money as I believe money is the problem with and in politics in the first place. I am a conservative, nonpartisan candidate. I want people to vote for my platform and what I stand for rather than a political party.
I am a wife to an amazing man, Matthew, a mother to a fantastic daughter, Annalise, and a grandmother to a grand-fur baby, Ollie. For fun, my husband and I competitively dance when we have time (Ha!). I am busy, but I would not have it any other way.

In high school, I found my faith. Notice I said “faith” and not religion; those are two different things. I humbly observe my faith. I love all people the same and am open to conversations and sharing my point of view. I will accept you for you, am not your judge, and will not criticize you for your decisions. Instead, I will respect you and, in turn, expect the same of you. Many of my views on Lincoln-oriented topics stem from my life and what I encountered as a young child.

I know what it is like to be extremely poor. I know the struggle. I had very few friends growing up and have often been told that I am too mature for my age. Since I have lived the life I have, that is not surprising.

“To stand with and for you to ensure your right to LIFE, LIBERTY and FREEDOM is upheld.”

HISTORY OF AN IMMIGRANT

Elina’s family is originally from Armenia. However, over time, they experienced multiple religious and land upheavals, which forced everyone out of their homes. In addition, those people were part of the Armenian genocide. The group resettled in Baku, Azerbaijan, where she was born.

When Elina was four, the country was in turmoil. Her family’s apartment was broken into, and they were given a choice: LEAVE AND LIVE OR STAY AND DIE. Her family left with nothing but the clothes on their backs. Many other families, along with hers, were loaded into an airplane, dropped off in Moscow, and told to scatter.

Elina’s father and mother were separated but reunited as her father began working on the family coming to the US. It took years to get approval. Finally, in November of 1993, they relocated to the US. Elina and her brother thought the apartment they lived in was a mansion due to the contrast to previously living in a one-room dwelling.

Eleven months later, Elina’s father died, which is all she remembers of him. Since he died when she was so young, she did not have a father figure for most of her childhood. Elina was scared but pressed on. She didn’t know any English and remembers needing a translator.

She was the first in her family to earn a doctorate and is now an educator at a college here in Lincoln. Elina’s also a tutor, mentor, and advocate for education. Additionally, she has her own editing business and is a Senior Certified Pharmacy Technician.

Elina Newman is a 2023 candidate for the City Council of Lincoln. Her steadfast faith and determination are just what the city needs to get back on track. She’ll work for what’s right…she’ll work for you! 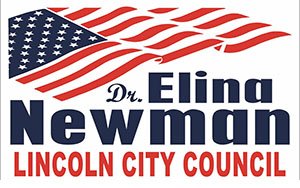 Paid for by Elina Newman for City Council